Sarah Painter
18:55 18 Nov 22
Midtown Chimney Sweeps were an absolute top notch company to work with. They were able to schedule us within a week (summertime). Texted reminders up until the day. Showed up on time. Owner/service provider was friendly and informative. Showed me how to use some of the features I was unaware of, and pointed out the safety features of the fireplace that were keeping us safe from potential fires and disasters. I would highly recommend this company to anyone needing a gas fireplace cleaned and inspected In Cincinnati!

Heather Switzer
14:48 02 Jun 22
Midtown Chimney Sweeps did a great job. Eric was very professional, courteous, and helpful. He explained the process as well as the workings and safety procedures for a wood burning fireplace. I am very happy with the results and will use them again.

Penny St. Peter
17:01 25 Oct 21
Very professional job! Eric was very knowledgeable . He told me some things about using the fireplace that I did not know . Would highly recommend this company!

Davidafco
00:55 25 Oct 21
I could not be any happier with my chimney sweep experience. I got a next day appointment and Eric was prompt and courteous. He provided the inspection and sweep in an efficient manner. More than that though was the valuable educational information he provided to me in the care and use of my fireplace. I will be scheduling with Midtown annually! Thank you!

Gretchen Pierce
16:09 15 Oct 21
Midtown Chimney Sweeps inspected and cleaned my chimney and fireplace. Eric was knowledgeable, and educated me, very well, about the condition of my chimney and fireplace even advising the size grate I should use in this fireplace. He cleaned up after he was finished! Very professional and friendly! He did a great job and I feel safe utilizing my fireplace now. This is an honest, upfront company who provides great service! They do what they promise to do at a very reasonable price. Do not hesitate to hire them for your chimney cleaning or issues with your fireplace!!!

Carolyn Homan
18:04 16 Apr 21
I cannot Speak more highly of this company! He was on time, did a very thorough job and explained everything to us so we could understand. He was kind to our family and cleaned up before he left. He made sure we knew exactly what he did and why he did it. I will Definitely be using them again and will refer this company to everyone we know!!

Sarah Julian
17:21 03 Feb 21
Eric was great!!! Did a full inspection and broke everything down to a normal non chimney sweeper terms for me! Even had great price ranges! I would not use anyone else for my chimney sweep! Thanks you so much! HIGHLY RECOMMENDED

Whitney Barnes
18:46 23 Dec 20
Amazing company and great pricing!Our service guy, Joe, was beyond amazing. Took the time to talk to us about every inch of our fireplace and chimney! We just bought our house and want a good service before using our fireplace, Joe came out and cleaned a ton of debris from our chimney and didn’t leave a spec of dust is the house! Highly recommend!

Mary Odeh
15:38 21 Nov 20
Eric was extremely thorough, friendly, knowledgeable, and professional. He went above and beyond to ensure we understood everything that was going on with our chimney system and never tried to upsell us on any services. We will definitely be using Midtown in the future and could not recommend them more highly.

Graham Foley
12:41 26 Oct 20
Eric of Midtown Chimney was our chimney cleaner. He was on time, very competent and extremely neat. He did the extra! We would recommend him.

Mick Black
13:07 15 Oct 20
Eric, Joe and team were super professional, hardworking & affordable. We couldn’t have asked for better customer service. Joe & his team went above & beyond to make us happy when removing our chimney. Additionally, they were courteous to our neighbor & cleaned up after the job really well. We couldn’t be more impressed with this company & will recommend to all our friends & family.

J.L. Millard
23:53 21 Aug 20
Eric did a great job taking care of the issue with our chimney chase! Midtown Chimney Sweeps were very responsive and was very good at providing details.

Mark Schneider
22:59 02 Aug 20
Thank You, Midtown Chimney, for sending Eric to do the job required on my chimney. He was knowledgeable and personable and I highly recommend your company and Eric to do another job if I need one done. Thanks again..

Nancy Thompson
16:41 08 Jun 20
Midtown Chimney Sweeps arrived on time and ready to do an inspection. Due to rain, they covered the floor to protect it and proceeded to clean the chimney. All of my questions were answered and procedures explained. When finished, they cleaned up and polished the fireplace glass. I highly recommend this company, as they are friendly, efficient and professional!

Maxwell Heflin
17:18 24 Jan 20
Knowledgeable, friendly and very informative! Was 5 mins early, very much appreciate the punctuality. Inspected both our wood and gas fireplaces. We just moved into our house this year and he gave me peace of mind that our fireplaces are safe for use. Highly recommend! Support small business!

TK Buchanan
03:48 10 Dec 19
Eric was very nice and informative. He showed me things to look for and advised me on getting a fireback to protect the walls of the fireplace. I highly recommend Eric and Midtown Chimney Sweeps!

Angie Neubauer
14:02 22 Nov 19
Excellent customer service. We had our chimney inspected because of a leak we were having. They came out checked it out and we found out we needed a chimney liner . They ordered the liner and was back at our house to do the job very quickly and thoroughly. No more leak!! Done at a very fair and competitive price .I'm very happy with their service and will definately use them again if needed for anything else.

Susan S
19:38 16 Jul 19
Eric was absolutely wonderful to work with. Very professional and courteous. I definitely look forward to working with him in the future. Great employees are a must in a service industry. Bravo!!

Emily Nelson
20:35 12 Jan 19
I was very pleased with the chimney inspection and sweep. Great price and Eric was prompt and courteous...very knowledgeable and willing to explain any and all chimney details. I will be using them for my annual chimney maintenance for sure.

Matthew Reed
21:31 13 Dec 18
Eric was awesome. Clearly more concerned with actually fixing the problem and keeping my family SAFE than he was putting money in his own pocket. HIGHLY RECOMMEND you give him a call for all of your chimney needs - he now has a customer for life out of me...

Absolute Sports Network
17:20 07 Dec 18
Had a dryer vent cleaning at home, and he came out and cleaned the fireplace and dryer vent where I work. Genuinely nice guy who is timely and efficient.

Andrew H
23:17 18 Nov 18
Our guy was Eric Hartman. He was great when it came to scheduling the inspection... and we were never wondering where he was, was he going to be there in time etc. He was very proactive in communicating these things. He went to work upon arrival, and again, was a very good communicator when it came to explaining the the things that needed attention vs the things that could wait for a bit. I really appreciated THAT as it gave me options plus he explained it in terms I could understand. When it came to pricing the repairs, I was pleasantly surprised and think the cost was very appropriate relative to the labor and skill involved. I compared "notes" with my buddies about the whole deal, and I feel like I got a solid deal.

Stan Dunman
01:24 13 Nov 18
I am the son of the owner of this company, as well as his helper from time to time and have even had him service my own chimney for winter time needs of having my fireplace inspected and cleaned. Very professional, very courteous and fast service. He did a great job and I was highly impressed with the knowledge and workmanship that they have.

richard hartman
04:38 09 Nov 18
Very helpful. Very professional. Provided me with low cost alternatives for every issue. Showed concern for the safety of my family over making a quick buck.

Middletown, Ohio deserves the best in chimney and fireplace care- at least that is what we believe at Midtown Chimney Sweeps and Dryer Vent Cleaning!

We are happy to sweep away the soot and provide a thorough and Certified Chimney Professional inspection of your fireplace and chimney. At Midtown, we don’t just clean chimneys (or sweep them) we also inspect them! This is a requirement of the National Standard for Fireplaces Chimneys and vents. Fireplaces should be inspected annually per the National Fire Protection Association national standard, and be swept as required. Why is chimney cleaning important? Because chimney sweeping removes the soot, or first stage creosote, that builds up in a flue, and which, if exposed to flames, will ignite and begin to burn along the entire inside walls of the flue.

What is a flue?

The flue is the innermost portion of the chimney that comes into direct contact with the products of combustion.

Dryer vent cleaning services, when booked simultaneously with a chimney inspection or chimney sweep, are entitled to a savings! Our dryer vent cleaning methods are done with a rotary brush that is designed to be used in dryer vent ducts. Clothing dryers back up with more and more pressure when the vent is incorrectly constructed with too many elbows, or when there is more than 35 linear feet of duct for a clothes dryer to push its exhaust through. Then it is compounded when lint builds up inside. The lint sticks to the vent walls. The walls effectively “close in” and restrict the air flow. This increased restriction creates more heat in the dryer- not the good kind of heat. This heat is on the exhaust blower, and the bearings of the dryer. The clothes dryer drum temperature increases, but since air flow is slowed down because of a dirty vent, it cannot cool properly. Eventually bad things happen to the dryer. And all of this can be prevented by simply following the manufacturers instructions –  have your clothes dryer vent cleaned and inspected annually.

As mentioned above, chimneys, fireplace, and vents should be inspected annually per NFPA 211. There are 3 levels of chimney inspection recognized by the National Standard (NFPA 211 Chapter 15).

We also have nicknames here of Middle City, Mid-City or Middie City! The ZIP codes around our city are 45042-45044, and the city website is http://www.cityofmiddletown.org/.

Middletown is a city located in Butler and Warren counties in the southwestern part of Ohio, about 30 miles north of Cincinnati. The city of Middletown Ohio was incorporated by the Ohio General Assembly on February 1833, and became a city in 1886.

Middletown was the home of AK Steel Holding Corporation, a steel works company founded in 1900, until offices moved over to the West Chester Township area in 2007. AK Steel’s factory is still located in Middletown. Middletown, OH was designated as an All-America City in 1957.

Are we local? Yes we are local. Our franchise owner lives right in the heart of our beloved Middletown, Ohio city, and services a wide radius including down into Cincinnati and up to Dayton, and out to Louisville, Kentucky and up to Columbus Ohio!

HeatShield® is a chimney liner repair system that eliminates the hazards and draft problems caused by gaps, cracks and spalling in otherwise sound masonry chimneys. 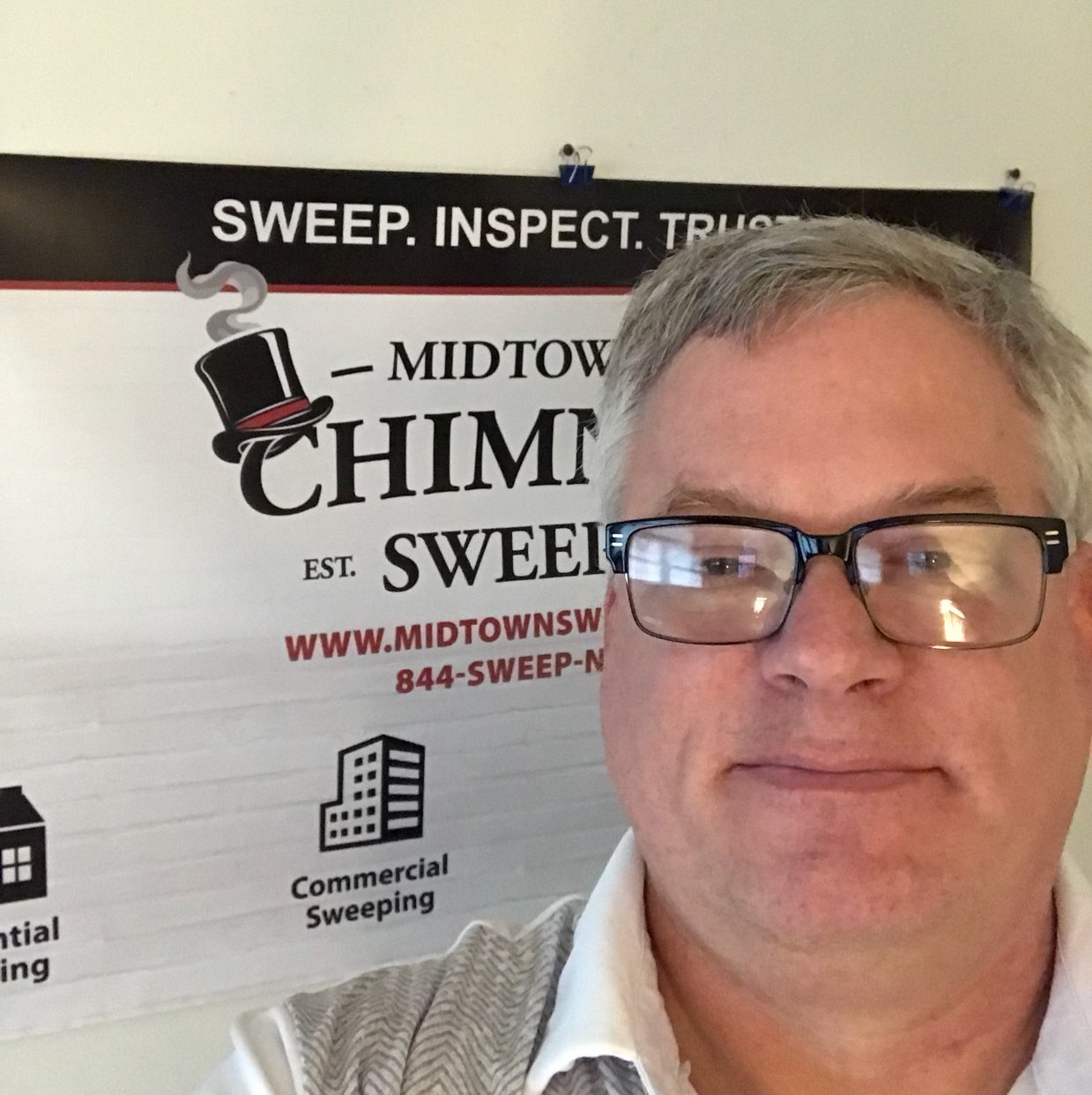