Midtown Chimney Sweeps Franchising exists today largely because of the vision and perseverance of Byron Schramm. His family, which has lived in Antelope Valley, CA for five generations, boasts aptitude for construction and farming. Byron has earned a bachelor’s degree in Biology and Mathematics from The Master’s University in Santa Clarita, CA. An entrepreneur at heart, he started three businesses before age 18 and filed for a provisional US Patent on an invention at age 21. He holds a provisional utility patent on a smart phone app for the hearth industry, a license for sailplane aircraft, and two classifications of California and Colorado contractor licenses. A world traveler since his youth, Schramm has spent time in Alaska, Syria, Denmark, Sweden, Australia, and New Zealand. Not to mention, he has visited Switzerland twice… with just a backpack and a low budget.

Byron has proven adept at dealing with failures. For example, he refused to be overwhelmed during the 2007 downturn in the US economy. In April of that year, Byron shifted his attention from the real estate and construction market to the hearth industry and adopted the name Midtown Chimney Sweeps from a hearth business before his. The new enterprise sprang to life with the integration of technology, systems, uniforms, and other best practices. Byron recognizes that the hearth industry must deliver quality customer service. Now that the Midtown Sweeps Dealer Service Network is a successful reality, coupled with the fact that local dealers often suffer unpleasant turnover rates, Midtown’s president may assert that he has uncovered a “blue-ocean strategy” in the chimney sweeping market. Rhys has spent the majority of his career in-home services franchising (O2E Brands – 1-800-Got-Junk?) and consulting to high growth service businesses (Trailblaze Partners). He joined Midtown in 2020 as fractional CEO to supplement the industry-specific skill already housed in the business with franchising and growth experience. His career achievements include being part of the launch team that took You Move Me from $0-$24m within 4 years, winning franchise of the year with 1-800-Got-Junk? & Growth franchise of the year with You Move Me (3 years running). He is also a partner in Elite Window Cleaning, a growing window cleaning franchisor based out of Kingston Ontario who more than doubled their revenue in 2019. Christina joins the Midtown team from a decade of customer service and has been a part of the franchising community for 6 plus years, working side by side and learning from worldwide brands and collaborating at countless roundtables, seminars, and networks. Working to build Midtown Chimney outreach and to support the franchise system with initiatives and clarity for business growth, Christina brings innovation, transparency and a ready smile. A lifelong lover of the outdoors, Christina spends her free time with her son, exploring, camping, hiking, and travelling as much as possible. With over a decade of management experience from the logistics, non-profit/fundraising, and healthcare realms, Ande is a proven leader. She heads Midtown’s scheduling center team with a focus on fine-tuning the customer experience. Ande has helped streamline booking and internal operations since joining Midtown in early 2021. She works with Midtown franchise owners, technicians, and customers daily to help keep homes operating safely nationwide.

Ande earned her Bachelors of Science in Exercise Science and Business Administration from Colorado State University. Outside of work, she is an accomplished international competitive trail ultramarathoner. Ever the explorer, she has lived in 5 countries, and traveled to 30 countries–so far. When she’s not helping make your home safer, she’s planning her next big adventure, volunteering, or exploring a new mountain trail with her S.O. and two pups. Kristen Grew near Lake Ontario and graduated from State University of New York College of Environmental Science and Forestry. She moved around the country for awhile working field jobs in Montana, Idaho, Minnesota, Pennsylvania, and the Washington DC area. She now lives in Colorado with her husband and their two dogs. Dez was born in Bakersfield, California. She moved to Denver Colorado in 2015. She is the newest scheduling team member bringing a decade of customer service experience, sales experience, and Specialty Retail management with her. When Dez is not hanging out with her daughter, family, or pets you can find her hanging upside down doing aerial yoga. In her own words “BALL BALL BALL BALL BALL BALL BALL”
Syl has taken the chimney sweeping world by storm since joining the Midtown Sweeps Team as the Branch Manager in February 2021. Ball throwing, puppy petting productivity, and squirrel watching at the home office has increased 100000% since she joined the team. Syl is a very good girl, and unsurprisingly, has won “Employee of the Month” 6 months in a row. 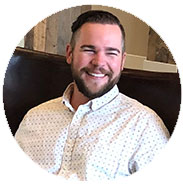 Kyle is a creative artist and entrepreneur in the design industry, with more than 9 years of experience as a marketing specialist and web developer, and over 12 years of graphic design experience. Owner and founder of Tag Team Design, Kyle performs all things digital for Midtown Chimney Sweeps. In his free-time, he enjoys a good series on Netflix, sometimes binge watching an entire season in one sitting! To add some more excitement to his life, he is an avid snowboarder, golfer, and tennis player who sometimes gets too competitive. Most days, you can find him working at his computer for too many hours at a time!

Teresa has over 15 years of accounting and business experience.  She graduated from Colorado State University, and spent time as an auditor at Deloitte & Touche, gaining her CPA certification in Colorado before moving into the private industry.  She spent a number of years leading the financial analysis and forecasting function for a Fortune 500 company.  Over the past several years, she has led accounting and finance roles at several small companies ranging in size from start-up to 200 employees.  Her focus is on developing financial literacy, discipline, and support in each company she is part of.  In her spare time, she enjoys spending time with her husband and two boys, and volunteers at her son’s elementary school. We are grateful for all the amazing money perspectives she brings to the company. She treats her work like an artist treats her paintings. And every P&L and Balance Sheet is a Monet.