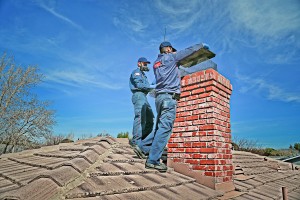 The History of your Chimney: Part One.

Have you ever wondered how our ancestors decided to build a tall ceramic funnel up through their ceiling? How much have chimneys changed since then?

I was looking for some specific research myself and I found a couple really great resources.

I decided to specifically focus on the European chimney development.

If we look back to before the chimney many tribes or families had indoor fires. They usually kept some small embers of the night-time fire burning all day because it was extremely difficult to get them relit the following evening. It was hard to create updrafts in small enclosed huts because of the small openings. It also created smoke-related issues because, as you know, an enclosed structure with small venting holes will stay a smoke filled place. The only positive was that it did keep small critters and insects from infesting the living space.

The Romans were the first ones to vent smoke through small tubes in their wall structures but if you look past that it is hard to find a working chimney prior to the 12th Century. In 1347 there are records of many chimneys being destroyed in Venice, and in Padua they are common by 1368.

In Tudor England many upper classes used chimneys and although lower classes still burned inside the home the chimney was becoming well known as a status symbol. This tall symbol of wealth was still dangerous and because of the poor craftsmanship of these early inventions, fire was an often occurrence. The earliest Tudor chimneys were made from a woven wooden structure covered by mud, clay, straw and dung. It wasn’t until the 17th Century that the first brick and mortar structures were constructed.  The English courts had also stepped in at this time and ordered to raise the top of the chimney at least four and a half feet above the roof.

In America during this time the chimney structures stayed wood and clay until 1789 when president George Washington considered brick chimneys a worthy prospect during one of his tours.

Scientists of this time were obsessed with the idea of heat. They saw the chimneys of the time as inefficient and although they knew smoke rose to the top of the roof – they were still having trouble designing a chimney that properly drew smoke up and out of the chimney. At this time they still thought heat was a fluid. Since smoke was carried by this fluid it would move from warmer to cooler regions. They knew once the room became sufficiently warm the smoke would properly vent up the chimney but before the desired temperature was reached, the room would often fill with smoke. In the 16th Century a Paris based scientist decided to take the matter into his own hands and suggested that if by narrowing the width of the fireplace and created a smoothness to the flue, the smoke would draft properly even before the temperature increased. In time this became the common fireplace in Europe.

In colonial America, the fireplaces still remained deep enough to hang a pot over the flames. This was a traditional British cooking method and when the pilgrims left England they brought the tradition with them.

In the next Chimney History blog I will talk a bit about the burning issues in England and the amazing creation of the chimney sweep trade!