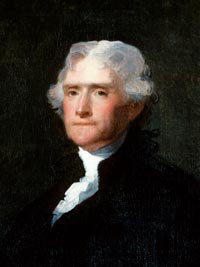 Chimney fire takes a chunk out of history!

Celebrating the fourth of July I had a desire to do a little research into our forefathers. Funny enough I found this story, and from a chimney sweeps perspective I could help but find myself drawn to it. Tragically, it was all thanks to a chimney fire. This specific story happens to be the worst imaginable informational loss that has ever been connected to a chimney fire. I can’t help but to wish Midtown Chimney Sweeps had only been there to inspect this fireplace!

As you may know Thomas Jefferson was known for his love of books.

This is the story of a “COLLECTION FORGED BY FIRE.”
It starts with an unkept chimney on a cold Christmas Eve morning and it ends with scholarly detectives, who spent ten years deep in the Library’s stacks and the international rare-book market. Thanks to these men and women that obsessed over the missing books, of the 4,000 volumes that were destroyed from Thomas Jefferson’s library, most have been found and matched. It was a long wait of 157 years but the Jefferson Library is almost again complete.
Of the original 6,487 volumes that Jefferson had sold to Congress in 1815, only about 2,000 remained after the blaze had eaten through the building. Considering the attraction we have for American History not many people today even know about the fire that had destroyed so much information. They say now that the “Library of Congress was forged by fire”, and that although they mostly are referring to the chimney fire that destroyed Congress in 1851, they are also talking about the first library Jefferson lost.

In 1770, Jefferson’s family home in Shadwell Virginia was also consumed by what was rumored to be another chimney fire. At this point Thomas Jefferson had inherited from his father 200 volumes including his law books and around 40 super rare editions. This loss only fueled his desire for book collecting so he began to buy from book sellers in Philadelphia, Annapolis, Williamsburg, and abroad acquiring himself 1, 250 titles by 1773.
By the time he returned to America in 1789, Jefferson had almost more than doubled his original number. He also had debt to prove it and by 1815 his obsession had gained him a total of 6,487 volumes.
Extreme care went into choosing each title and Jefferson prided himself in the fact that he was gaining a private library that was unrivaled anywhere in the country. He was also very determined to buy first editions, best editions, and he obsessed in finding books that fit into his needs as: a philosopher, a statesman, a diplomat, a scientist, a planter, an architect, a musician, and a scholar.
Most were collected in their original languages of Greek and Latin. It really was the embodiment of American enlightenment, and Thomas Jefferson took great pride in his collection.
As much as he treasured his private library, on September 18th, 1814, he offered it to Congress. It was to refill the library that was burned a month earlier by a British force that had torched the building on August 24 1814. He had no idea it would again be turned to ash by foolish burning in an uninspected chimney.
Jefferson wrote, “I have been 50 years making it, and have spared no pains, opportunities, or expenses. Commending the breadth and depth of this library , particularly in the sciences, and it’s usefulness to Congress, he guaranteed that there was no subject to which a member may not have occasion to refer.”
With it’s new foundation the Library of Congress resided in it’s Capitol space until the disastrous 1851 Christmas Eve chimney fire that destroyed  55, 000 volumes, including two thirds of Jefferson’s remarkable library.
In preparation for the Bicentennial celebration in the year 2000, a revival had begun to find replacements for Jefferson’s private library. After ten years there are only 300 titles missing from the original collection.
A somewhat happy ending to this tragedy. If only everyone took the quick effort to inspect and clean their chimney yearly, these kinds of losses could be prevented.
“At the new library in Congress they say viewer can immerse themselves in Thomas Jefferson’s mind and his 18th century world that produces a new experiment in self-government, and experiment that could succeed if only enlightenment prevailed over ignorance.”

To see the source material or for further information click here.